EVENT: Sunday September 12th. Fourth and final round of the Gates of Brockenhurst Gurston Down Hillclimb Championship and the BARC (SW) Top Ten Challenge

In glorious sunny weather a good crowd was entertained to a superb final round of the 2010 Gates of Brockenhurst Gurston Down Hillclimb Championship and the BARC (SW) Top Ten Challenge on Sunday September 12th, and there were thrills, spills and fast times aplenty on the demanding speed hillclimb course at Broad Chalke near Salisbury. 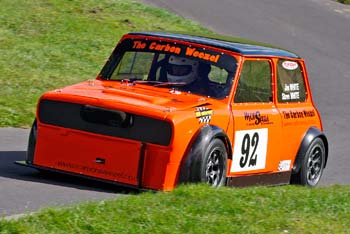 Best Time of the Day went once more to Andrew Forsyth from Blandford driving his father's 3.5 litre Pilbeam MP58 Cosworth, with a time of 27.72 seconds. Not only was Andrew the only driver to break the 28-second barrier on the day but this latest win completed a clean sweep of outright wins at all six of Gurston Down's 'club' events this year, and four maximum points scores in the Top Ten Challenge, a title he actually tied up at the previous event in July.

The Gurston Down Championship also came to an exciting conclusion. Simon Neve from Yeovil was the only driver in with a alight chance of wresting the title from Stockbridge's Roy Barker, the latter guesting in a non-competitive car after destroying his race-going Mitsubishi Evo 5 in July just after setting a new class record and a virtually unassailable points total. The Yeovil driver, aboard his own potent Mitsubishi Evo 6 set a personal best time but had to be settle for the runner up position in the championship as Barker breathed a sigh of relief!

And there was a great scrap for third overall between Salisbury's Chris Cannell in his historic 1.7 St Bruno Roughcutter and Southampton's Jim White in his highly developed 1.4 Austin Mini, the verdict going to Cannel by just 0.34 points, or just one third of a second over the season's racing!

Location:  1 mile west of Broadchalke, 9 miles SW of Salisbury, Wiltshire. Turn off the A354 at Coombe Bissett on the unclassified road to Broad Chalke, follow RAC signs.